On 𝗔𝘂𝗴𝘂𝘀𝘁 𝟭𝟭𝘁𝗵, 𝘀𝘁𝗮𝗿𝘁𝗶𝗻𝗴 𝗮𝘁 𝟴 𝗣𝗠, One Night Gallery presented 2021’s first outdoor art show. The experience and exhibition’s journey was created by 𝗥𝗜𝗭𝗜, the artist duo who will merge the two worlds by showcasing architectural installations throughout the gardens located on Molière Street (the entrance is on street Amiral Constantin Bălescu). The exhibition was hosted by 𝗚𝗿𝗮̆𝗱𝗶𝗻𝗮 𝗧𝗩𝗥 𝗠𝗼𝗹𝗶e𝗿𝗲 with an important historical background whose story spans across 65 years (turned this year), when the very first professional TV broadcast in Romania was done.

The concept of the art show – 𝗘𝗟𝗘𝗠𝗘𝗡𝗧𝗦, presented the works of RIZI, a design studio which experiments at the intersection of architecture, technology and communication. Founded in 2013 by an architect and a communications & multimedia specialist, the studio explores emotions through technology. The two artists have designed an immersive experience, fusing nature and technology in order to celebrate innovation and design, but also to honour nature. The mix between nature, design and technology was observed through 𝟵 𝗮𝗿𝘁 𝗶𝗻𝘀𝘁𝗮𝗹𝗹𝗮𝘁𝗶𝗼𝗻𝘀. Each of them represented one or a combination of the elements and will be at your reach so you can interact with them.

𝗡𝗔𝗧𝗨𝗥𝗘 was seen in the form of 5 installations, giving you the chance of getting transported in a magical world of the senses whilst discovering the cyclical processes of the planet. From a kinetic architectural installation, a water vapor installation that plays with color, an installation with light that changes according to the movements made by visitors, a visual reinterpretation of fire through an architectural construction, an interactive installation that will allow the public to play with the idea of ​​communion of water with fire, the exhibition is a discourse on the organic complementarity of the world. As we discover the fragility of our planet, being able to observe how simple but powerful the elements are is a way to raise awareness and offer more appreciation to our environment. In parallel, 𝗗𝗘𝗦𝗜𝗚𝗡 was represented by 4 installations, which compose a multi-sensory experience through light, sound and movement. The aged studios are a mix of nature and urban life, a place that reminds us how technology has evolved through time and where numerous films and theatre plays have been recorded. To mark the 65th anniversary and to underline the importance of the digital as medium of creation, but also the role it has in preserving & archiving historical artistic & cultural products, the exhibition’s centrepiece was a video-mapping on the facade of TVR’s initial headquarters.

Thus, during the exhibition, a collage of selected scenes from films part of TVR’s archive was be presented – part of the digitisation programme of the television archive – the sequences were an inspiration resource for RIZI studio, who created a collage combining the architectural elements of the building with displays of fragments from productions such as: „𝘈𝘳𝘢𝘯𝘤𝘢” based on a text by Cezar Petrescu and „𝘈𝘱𝘰𝘴𝘵𝘰𝘭𝘶𝘭 𝘉𝘰𝘭𝘰𝘨𝘢” after the novel written by Liviu Rebreanu, both directed by Dominic Dembinski, „𝘊𝘶𝘮 𝘷ă 𝘱𝘭𝘢𝘤𝘦” by William Shakespeare and „𝘔𝘦ș𝘵𝘦𝘳𝘶𝘭 𝘔𝘢𝘯𝘰𝘭𝘦” by Lucian Blaga, directed by Olimpia Arghir and many more.

The landscape architecture of the exhibition was done in collaboration with Loisir – a landscape design studio known for their delightful intervention with nature. One Night Gallery Love Rizi was be the first exposition to start a series of events that will take place across the country. We are going national for the second time, this year with 3 new cities added to the itinerary, all soon to be announced.

The new media art exhibition is a project carried out in partnership with 𝗧𝗩𝗥, 𝗖𝗮𝘀𝗮 𝗱𝗲 𝗣𝗿𝗼𝗱𝘂𝗰𝘁̦𝗶𝗲 𝗧𝗩𝗥 and powered by our innovation and creative partners: 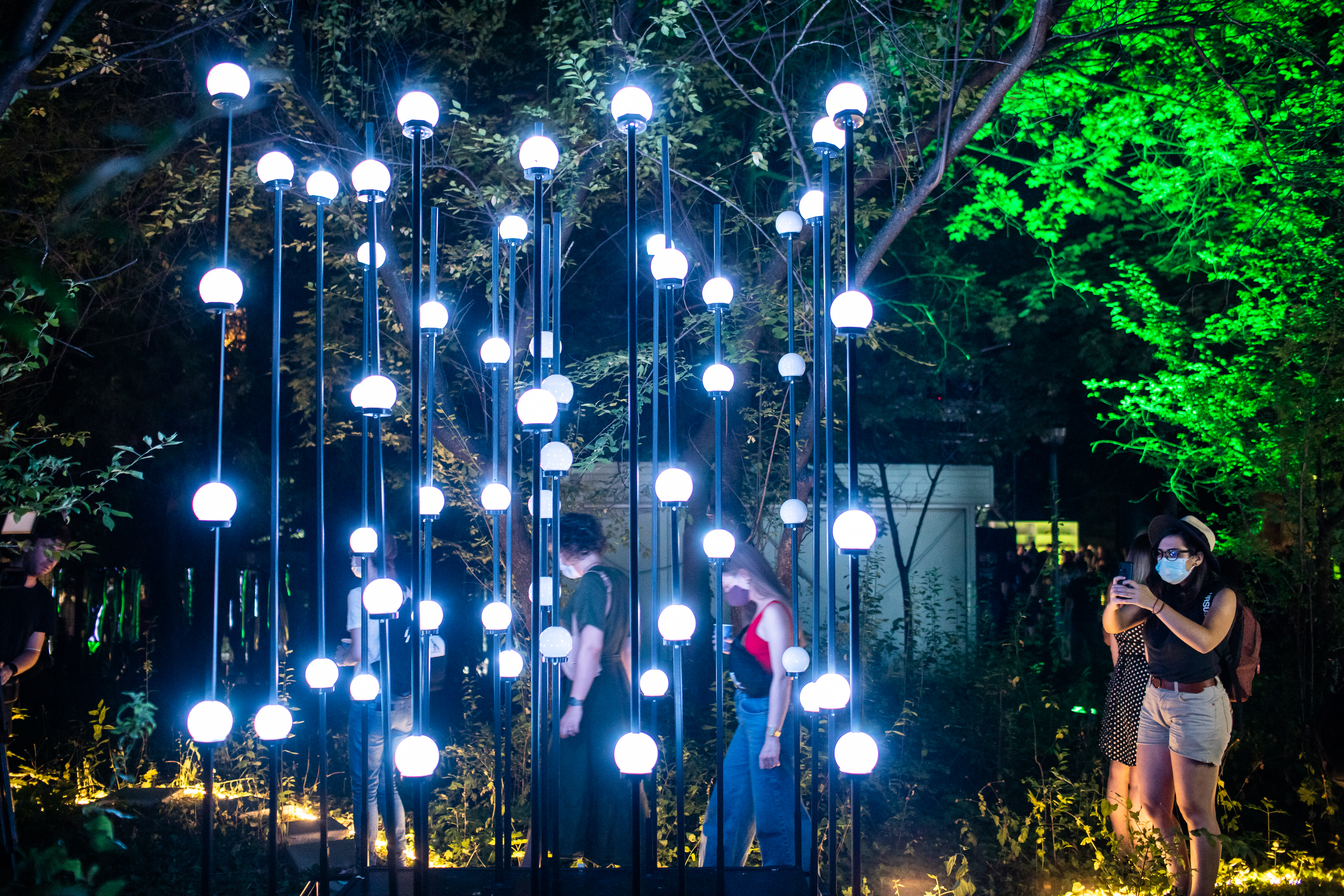 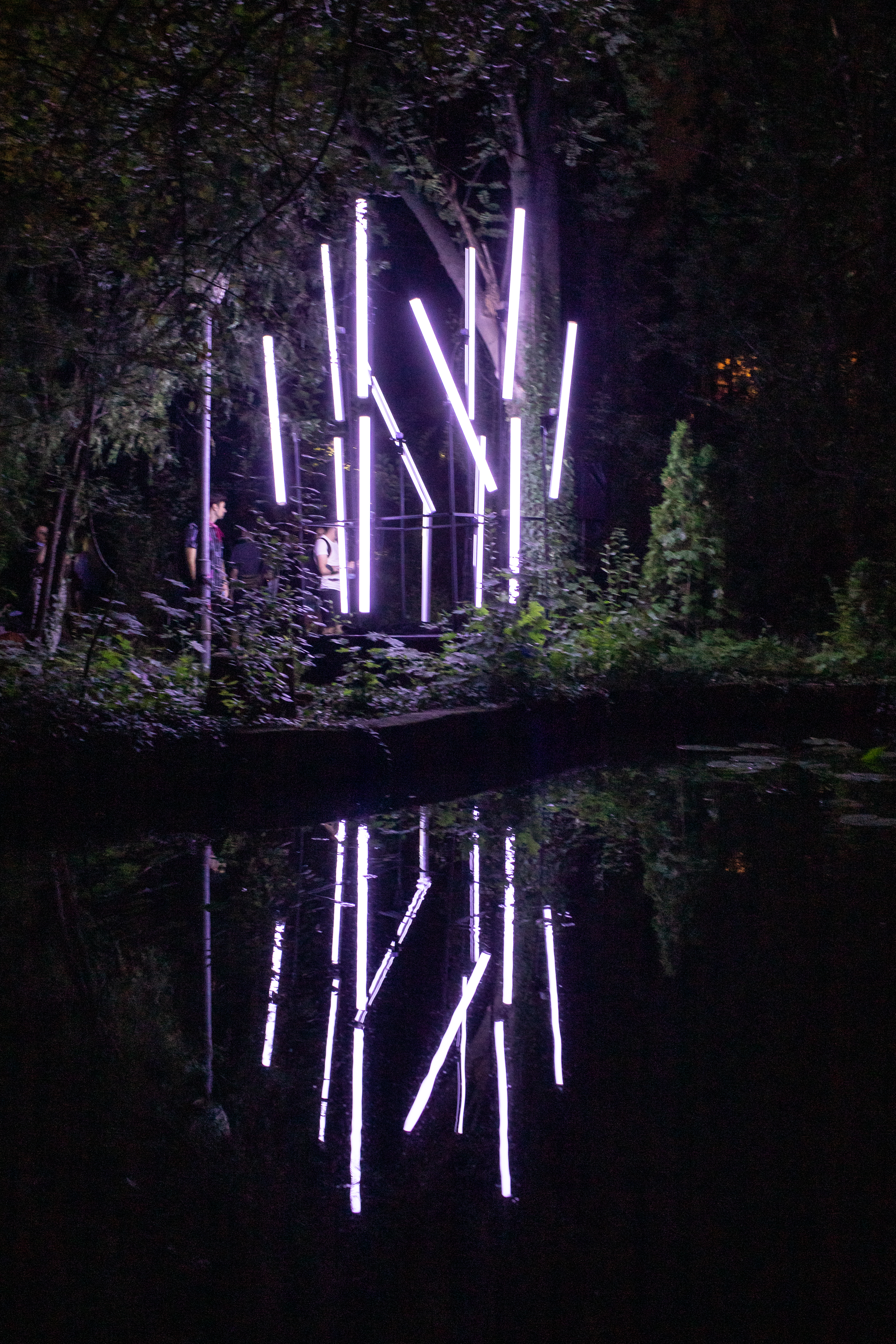 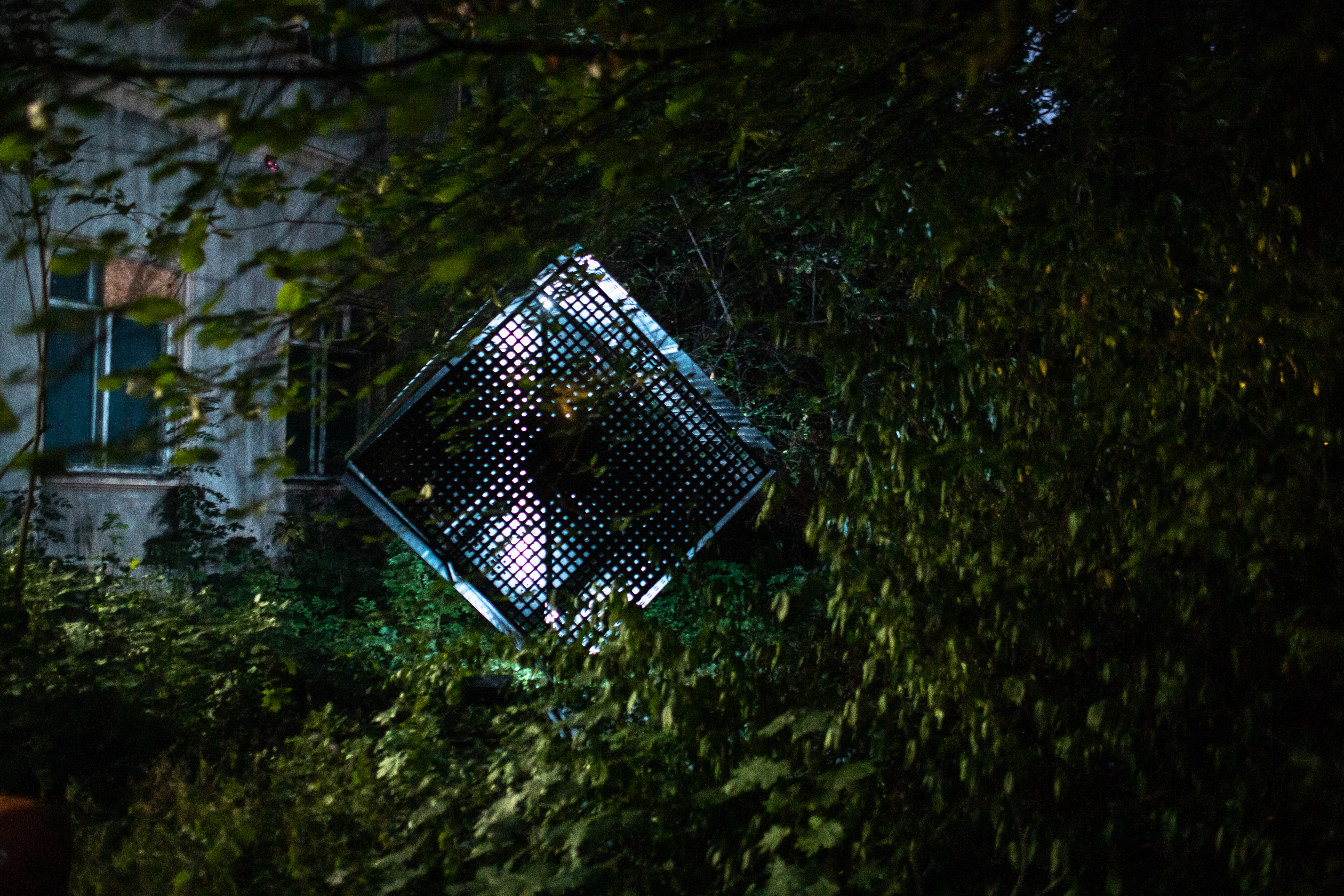 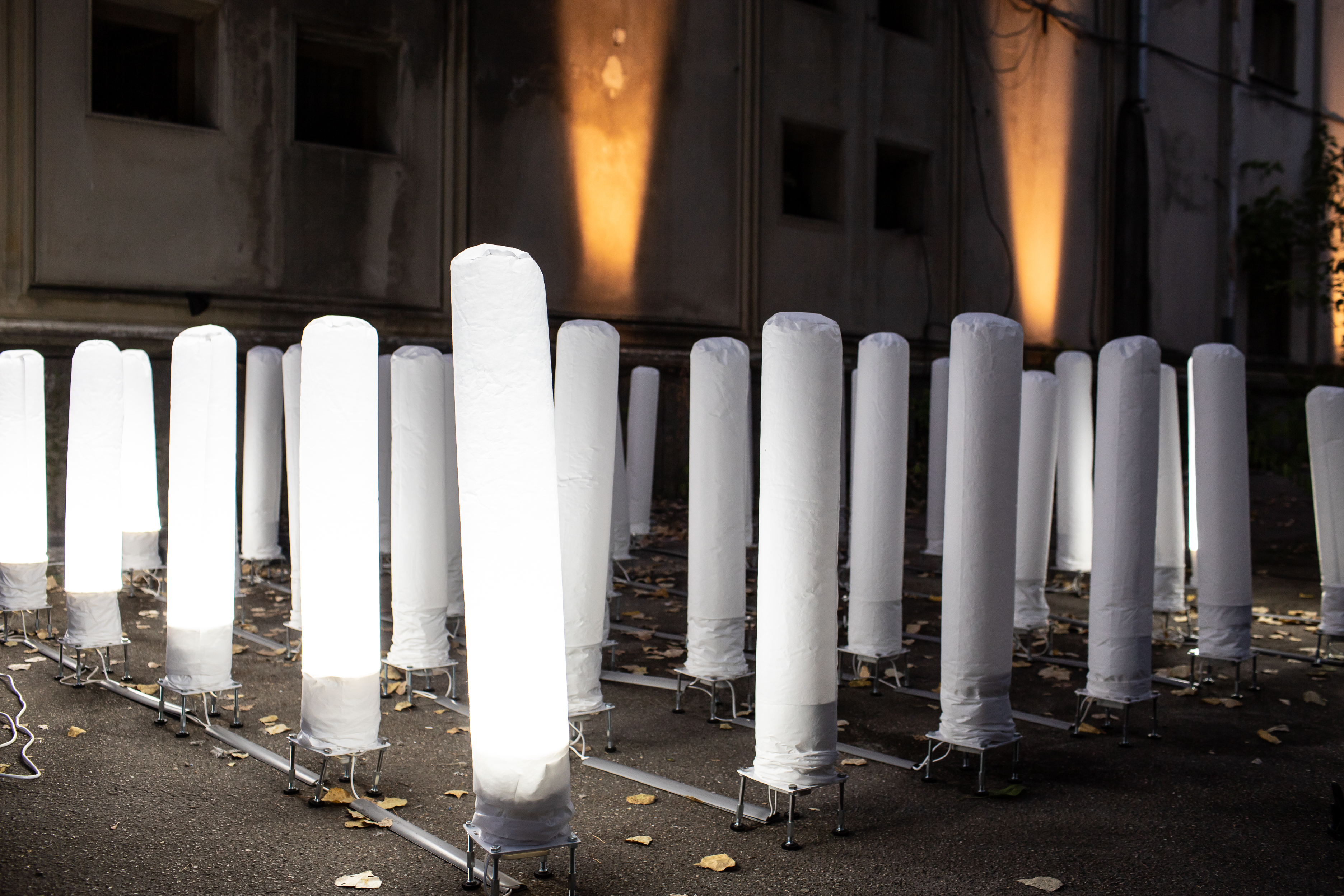 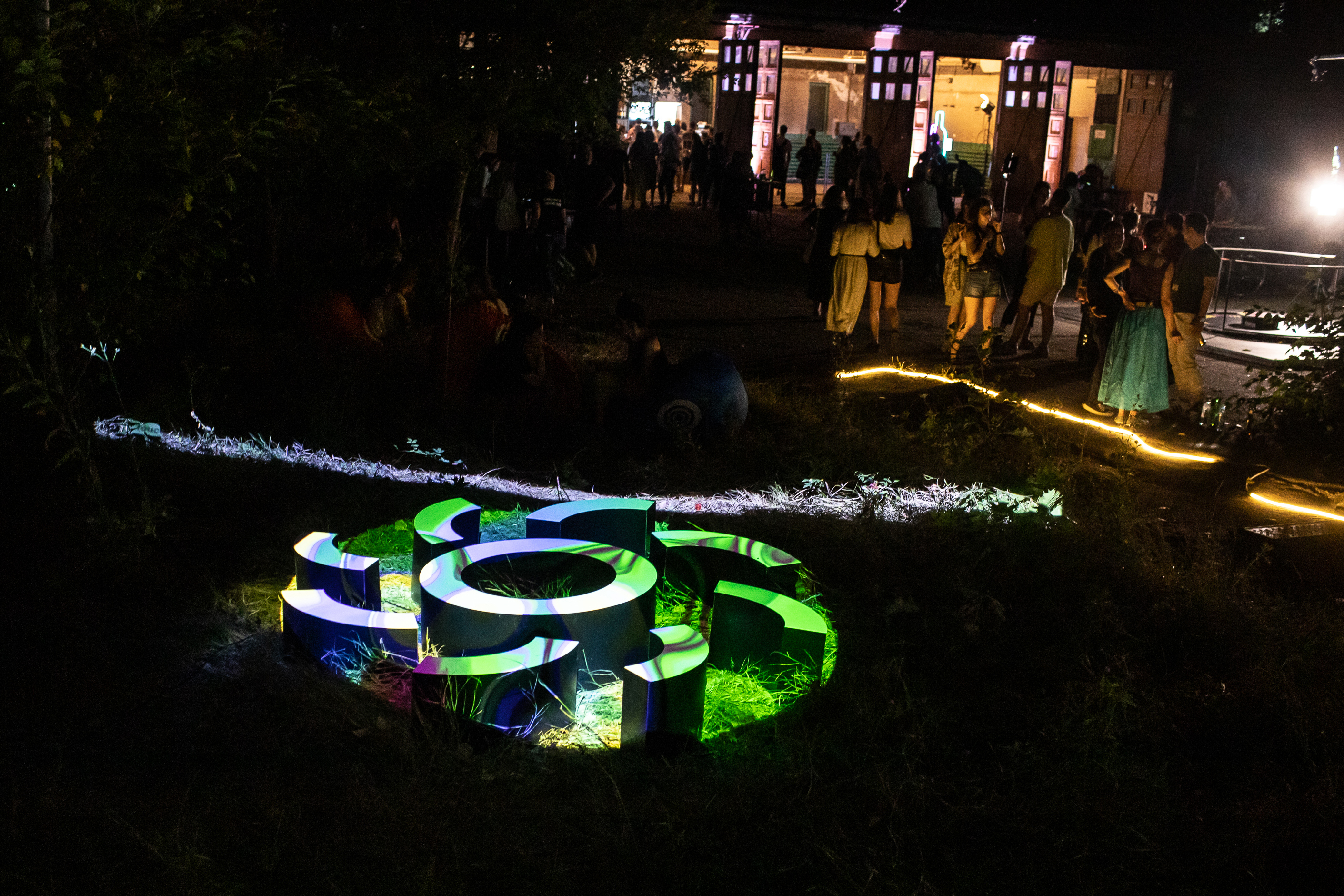 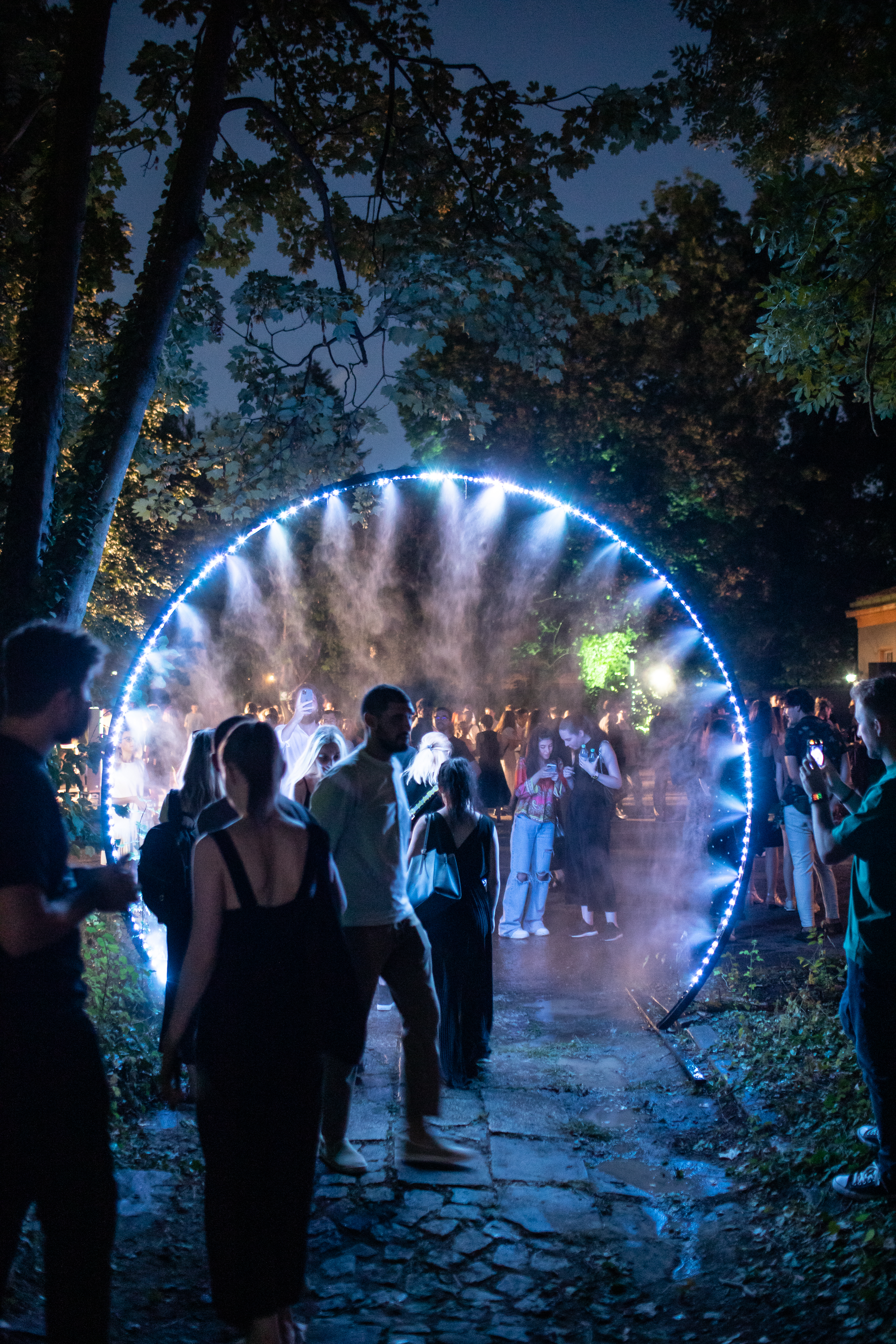 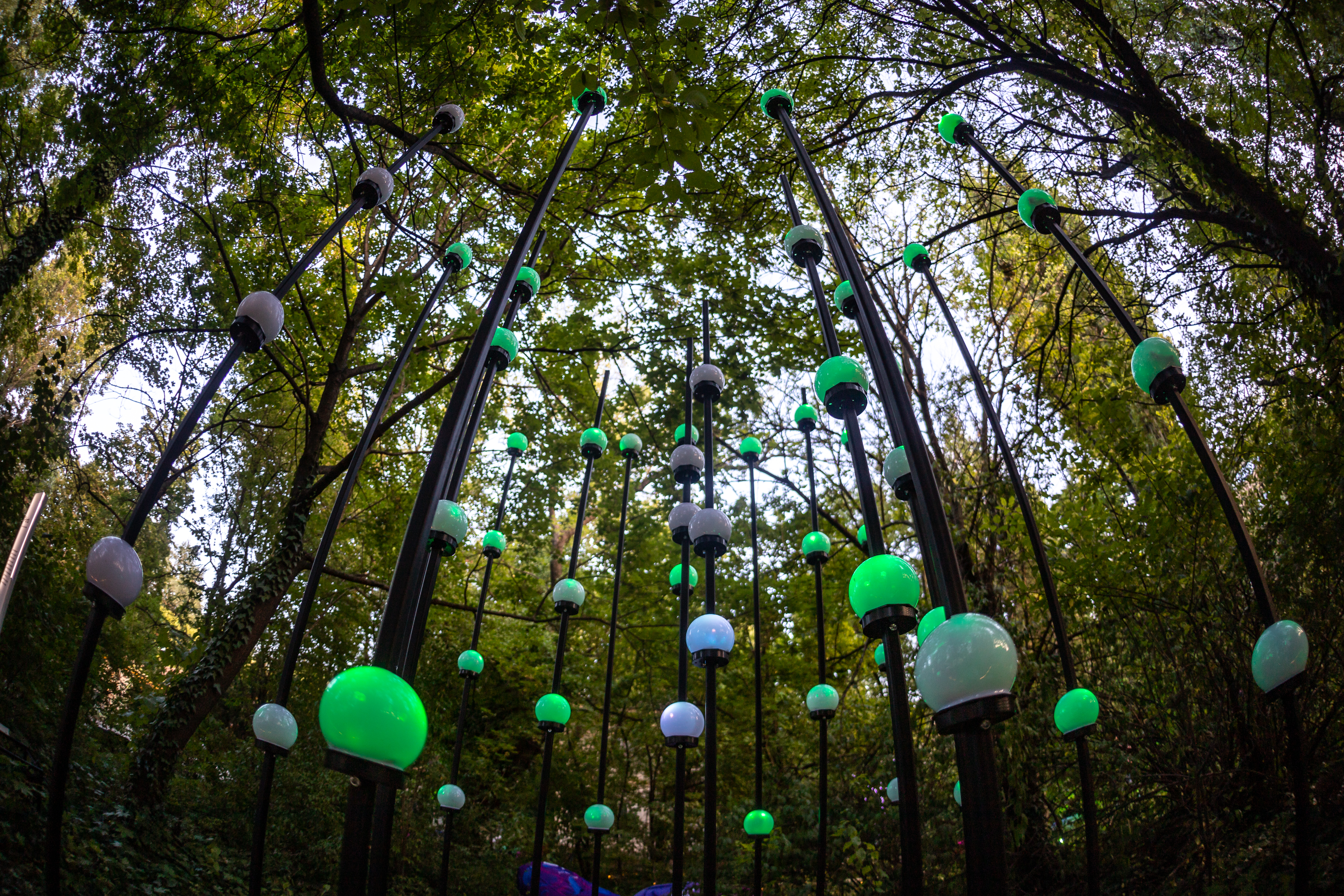 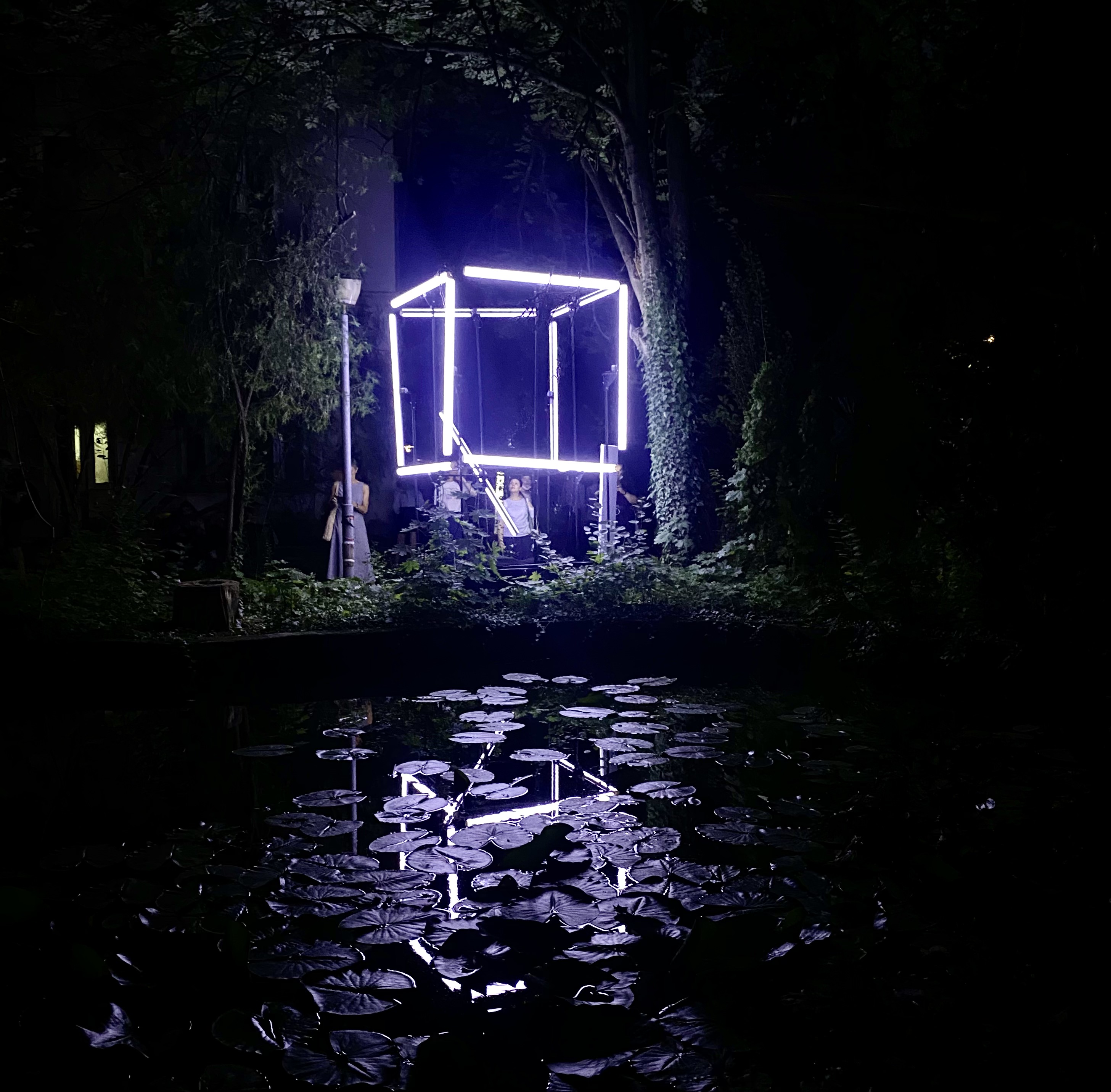 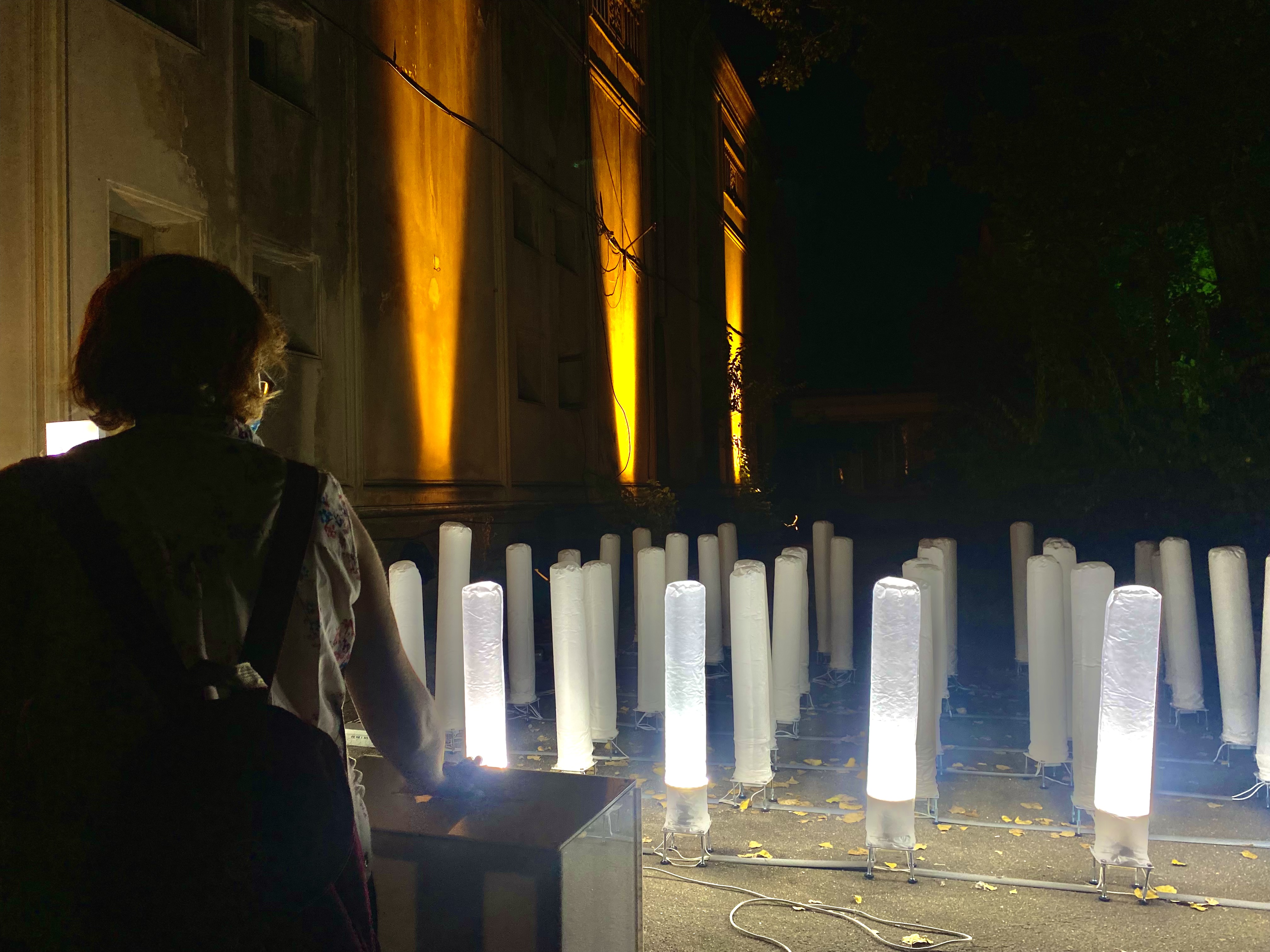 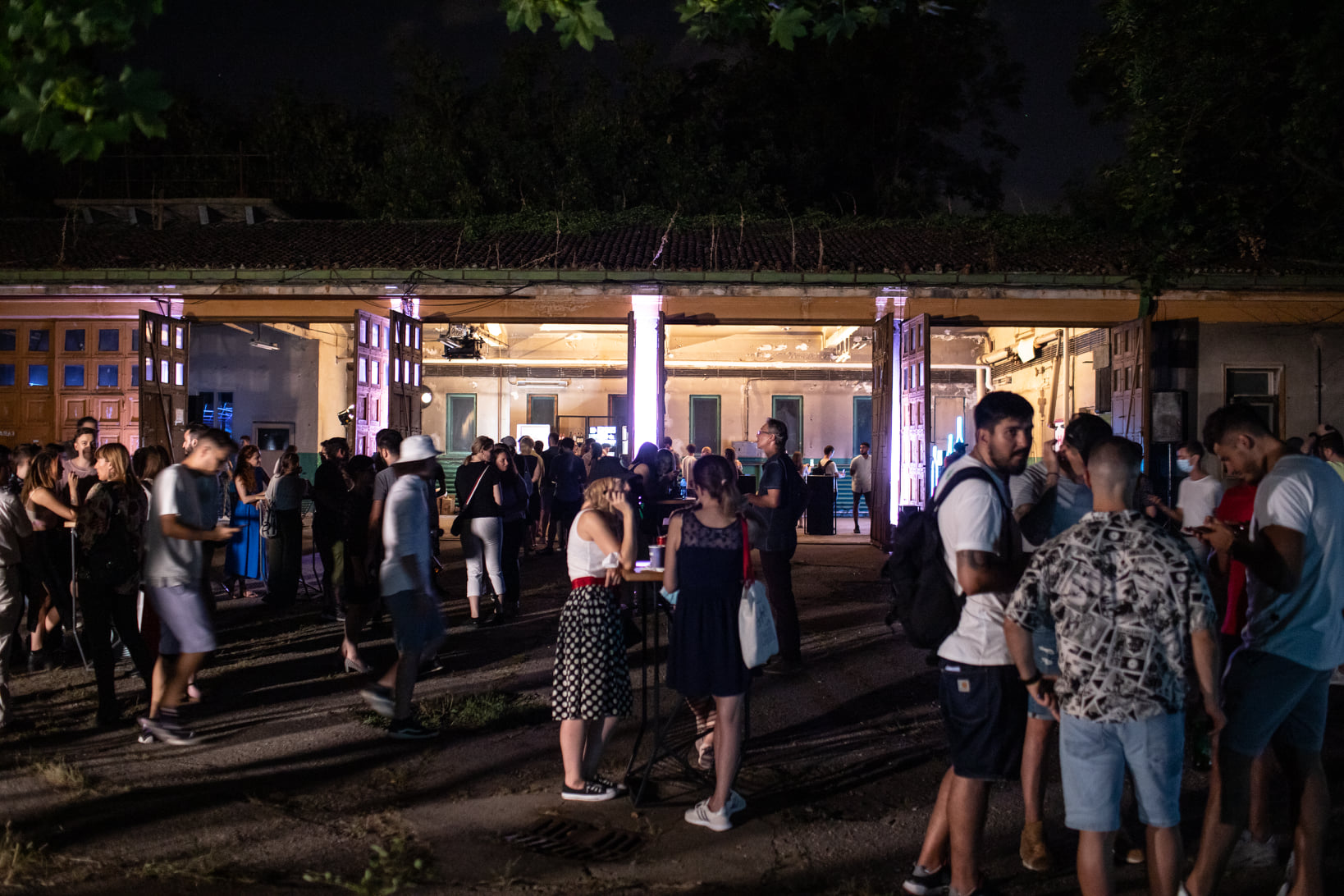 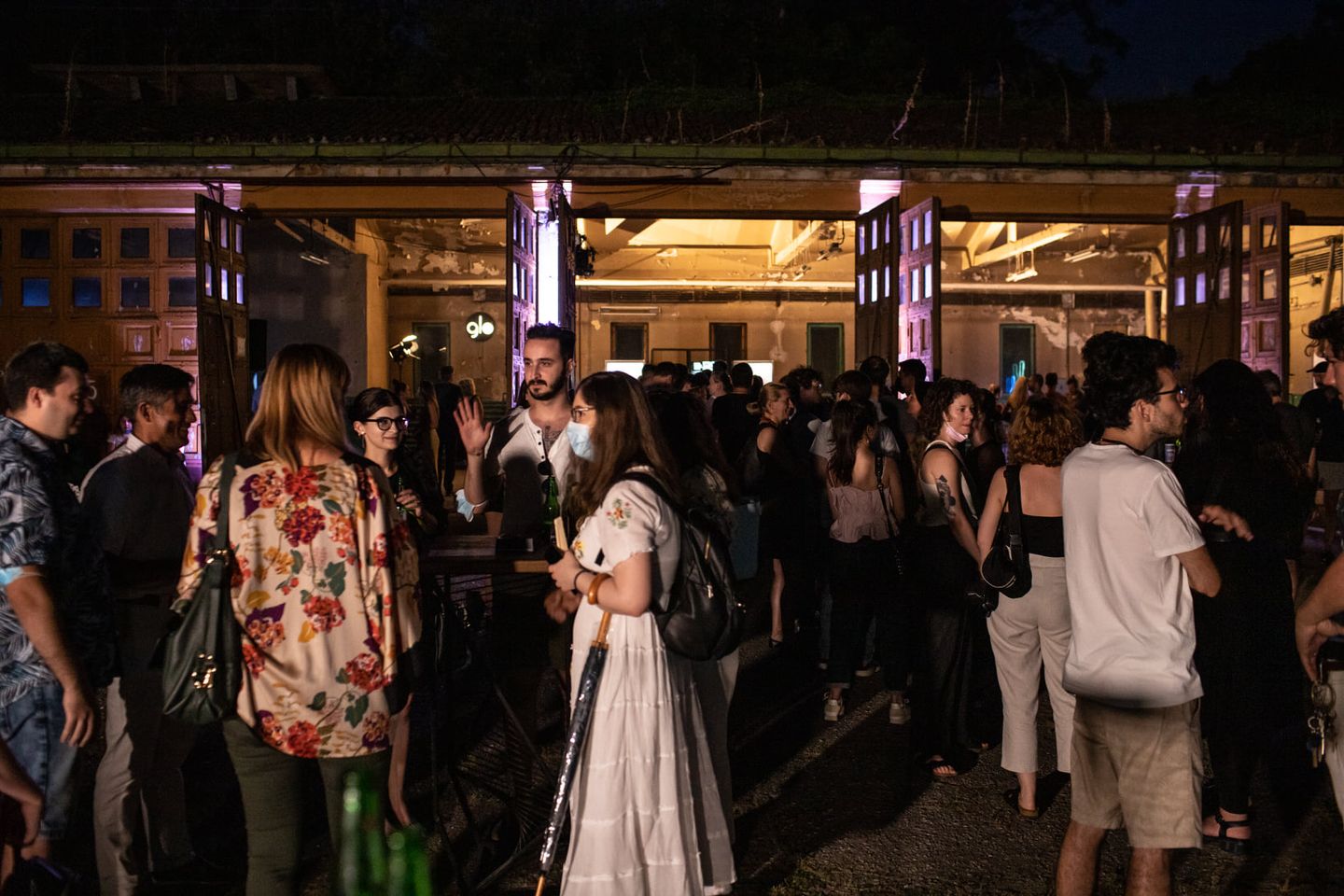 #1 LOVE PAUL DERSIDAN
TALK TO US 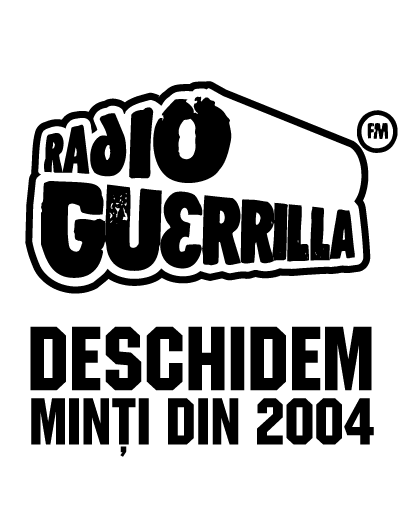